Somaliland’s Local Councils were elected November 2012; in five years term which ended November 2017. On 6th March 2017, Guurti House extended their time to 28th April 2019. Presently; they are executing their day to day activity with no legal mandate. In Somaliland’s Democracy, sometimes institutions can stay the office; beyond their elected term.

President of Somaliland Muse Bihi Abdi, issued a presidential decree on 30/04/2019, declaring three months of state of emergency in three districts of Sanaag Region, including Erigavo the capital city of the region, Eil-afweyn, and Gar-adag. Article 2 of the presidential decree stated its security measures purpose; and called the national army to take over any measures to protect the security, and prevent anyone who is engaged or seems to be taking actions of insecurity. Article 3 of the Decree is about the administration and decision making during the state of emergency and also calling the national army to take over the administration and all decisions of protecting the security, and prevent dangers of insecurity.  As stated article92 of the Constitution, the President submitted his decree of emergence to two houses of the parliament to legalize or reject.

The Center of Policy Analysis (CPA) believe that this decision of emergency will directly affecting the upcoming Elections of (parliament (lower-house) and local councils, which is supposed to happen 12/12/2019, as well as the Voter Registration which are supposed to update it before the election date. CPA is welcoming any step of restoring security and stability in Sanaag and eastern regions, and bring in front of law those killed the innocent security officers, but highly concerned that this emergency decision is a setback to Somaliland’s democratization process since the national army has taken over all the administration and decisions affecting those areas.

On 18 May 1991, after suffering 21 years under the brutal military dictatorship of General Siyad Barre, and experiencing three decades of marginalization as part of the united Somali Republic, Somaliland unilaterally reclaimed its pre-union independence from Somalia. In the following years, a nascent democratic system was established. A National Charter was approved by consensus soon after the withdrawal of the union, in which it was agreed that government would be based on a system of power-sharing between clans. This transitional arrangement was then superseded by a national constitution of the republic, which was confirmed near-unanimously by a national referendum in 2001, in which 97% of voters approved. With its approval, the constitution legally ushered in the progression for a clan-based politics to a multiparty democratic system.

Since then, Somaliland has held six successful democratic elections, including three presidential elections (in April 2003, June 2010 and November 2017), one parliamentary election (in September 2005) and two local council elections (in December 2002 and November 2012). All aforementioned elections were conducted in a peaceful and inclusive manner, a very rare occurrence in this volatile Horn of Africa region, which is overwhelmingly dominated by long-sitting, undemocratic and authoritarian leaders. Beyond that, in 2016, Somaliland conducted the most advanced voter registration processes in Africa, according to Abdikadir Iman Warsame, Chairman of the National Electoral Commission (NEC) of Somaliland, in which an iris-based biometric system was used for one of the first times anywhere in the world.[1]

Although Somaliland has been exercising multiparty democracy for almost 18 years now, it has in many ways failed to institutionalize this system. Of the several major setbacks and shortcomings of the democratic process, one of the most serious and intractable is repeated election delays, in which extensions are granted to the term periods of Somaliland’s representative institutions. Such delays have occurred at all levels of government, from the executive and legislative to the local. A catalogue of these delays are as follows:

Political parties in Somaliland should have served as platforms for the expression of the democratic ambitions of the citizenry, but, unfortunately, it seems that all the three existing parties—Kulmiye, UCID and Waddani—all operate through structures that are highly undemocratic and hierarchical. These parties regularly fail to hold their General Assembly and Central Committee meetings on time, routinely violate their own bylaws, and have shown a repeated willingness to dismiss high officials and central committee members from their respective parties, as has recently occurred in Waddani, Kulmiye and UCID.[3] Most importantly, in all three parties, overarching power is concentrated in the chairperson, the party’s central leadership, and the clans affiliated with the party, leaving little room for democratic debate or policy formulation among rank-and-file members.[4]

In short, the trajectory of Somaliland’s long journey of democratization has led the country towards the normalization of overextended terms, election delays and electoral process setbacks, leading to a situation in which: 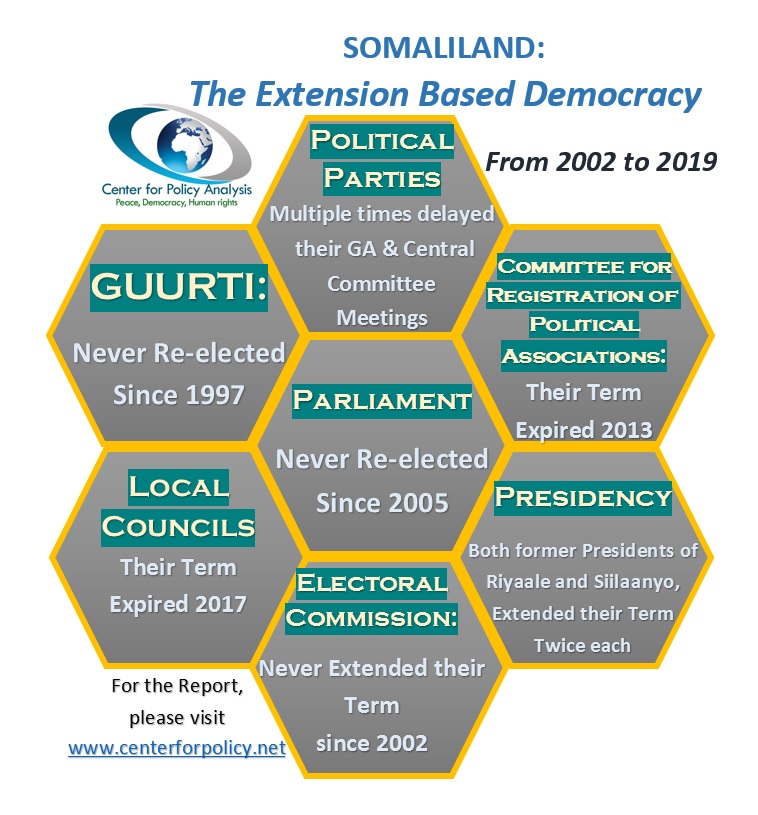 In increasingly deteriorating situation, the space is shrinking in Somaliland. Journalists are arrested, beaten up and prosecuted, according to the reports of the Somaliland Journalists Association and human rights groups. Media houses were shut down through court decisions and administrative decisions made by the Ministry of Information. The last to suffer was Foore newspaper, which has been banned by Hargeisa Regional Court over a piece reporting about “a presidential palace” to be built in Hargeisa. The repressive actions are also directed against social media users, dwindling already shrinking space. Unsanctioned protests are banned.

Somaliland’s democracy, while impressive given the conditions under which it was developed, remains fragile and growing. As a result, frequent term extensions, if they become the norm, may have an unappreciated and lasting impact on the status of Somaliland’s democracy, both in terms of its ability to deliver positive change for its citizens, and in terms of its good standing amongst the international community. All Somaliland leaders, therefore, whether in opposition or among the ruling party, should bury their differences and allow the democratization process to move forward, for the good of the country.

Referring the 6th Points of the “Joint Press Statement from UCID and Kulmiye Parties,” they agreed and suggested to nominate the new National Electoral Commission in 1st August 2019, but they will take office on 29th November 2019, and the Parliamentary and Local Council Elections will happen on 12th December 2019. The two parties agreed to add two more members to current seven members of NEC after the coming election of the parliament.

To come up a lasting solution for the election-related dispute and to proceed the democratization process and sustain the security and stability of the country; CPA is calling to the Opposition Party of Waddani to accept the nomination of the new members National Electoral Commission to be nominated on 1st August.  Also, CPA is calling to UCID and Kulmiye Parties to accept to appoint all nine members of NEC on 1st August 2019. Then all side should agree to allow the new commission to commence their task as soon get approval.

CPA researched the dates that Guurti extended the term of President, House of Representatives and also itself. Unfortunately we did not find a correct dates from the government websites about the decisions of Guurti. Even the information related to Election Timelines are limited, and the National Electoral Commission’s website have limited information about the part Elections and the timelines. At least it is needed to have, a center that can store the information and experience of Somaliland’s Democratization Process. If there are errors in the dates, this is the best information we able to collect using different sources.

If you calculate the number of years that Guurti Extended to House of Representatives, former Presidents, Local Councils and Guurti itself for the last 18 years is more than 40 years to gather.

12 January 2002: First Presidential Extension after the constitutional referendum, Guurti extended the term of the president for one[7] year period.

03 March 2003: Guurti Extended the term of House of Representatives to two years and their term will end 25 May 2005

06 May 2006: Guurti itself extended it’s mandate by four years, and announced that their term will expire October 2010.

15 April 2013: Guurti extends the term of the House of Representatives by 2 years, one month and 27 days, and the parliament elections shall happen June 2015, and Guurti itself extended their mandate up to 3 years.[11]

26 April 2016: House of Representative extends and renewed their 2 years term and the mandate of Committee for the Registration of Political Associations[13]

04 March 2017: The Guurti extends the term of the president up to six October 2017, and the parliamentary elections should happen October 2018, Guurti has the usual one year extension. [14]

28 April 2019: The Term of Local Councils expired, without extension, but still they are in office.

[3] To take a few examples, on 15 April 2018, Waddani Party fired their General Secretary; on 30 September 2018, Kulmiye Party leadership fired the Chairman of its Central Committee, without consulting the members of the Central committee; and on 13 January 2019, UCID Party fired their first Deputy Chairman.

[4] According to CPA’s 2018 Report on Campaign Finance, clans have big role in shaping the party’s politics and strategies, as it is the clan of the candidate who are the ones who are financially supporting and covering all expenses of the party.

[5] In November 2018, the NEC held a press conference, in which they highlighted the five major challenges to be resolved before elections can take place at the end of 2019. This include (1) approval of the Election Bill, including the women’s quota; (2) solving the issue of Waddani’s vote of no confidence against the NEC; (3) arriving at a consensus on the seat allocation of the Parliament; (4) securing the required budget for conducting the election; and (5) updating the voter register.

[6] In March 2018, the Chairman of Waddani called the NEC to resign, claiming that his party has no confidence in the current NEC members, following their handling of the 2017 presidential elections.

[11] Guurti Extended the Term of HoR and also their House of Elders http://www.somalilandlaw.com/Golaha_Guurtida_Somaliland_oo_Wakhtigii_u_kordhiyay_Golaha_Wakiiladda.pdf

[13] House of Representatives voted a motion to renew the mandate of RAC https://goobjoog.com/baarlamaanka-somaliland-oo-muddo-kordhin-u-sameeyay-guddiga-diiwaangelinta-ururada-siyaasadda-iyo-ansixinta-axsaabta/