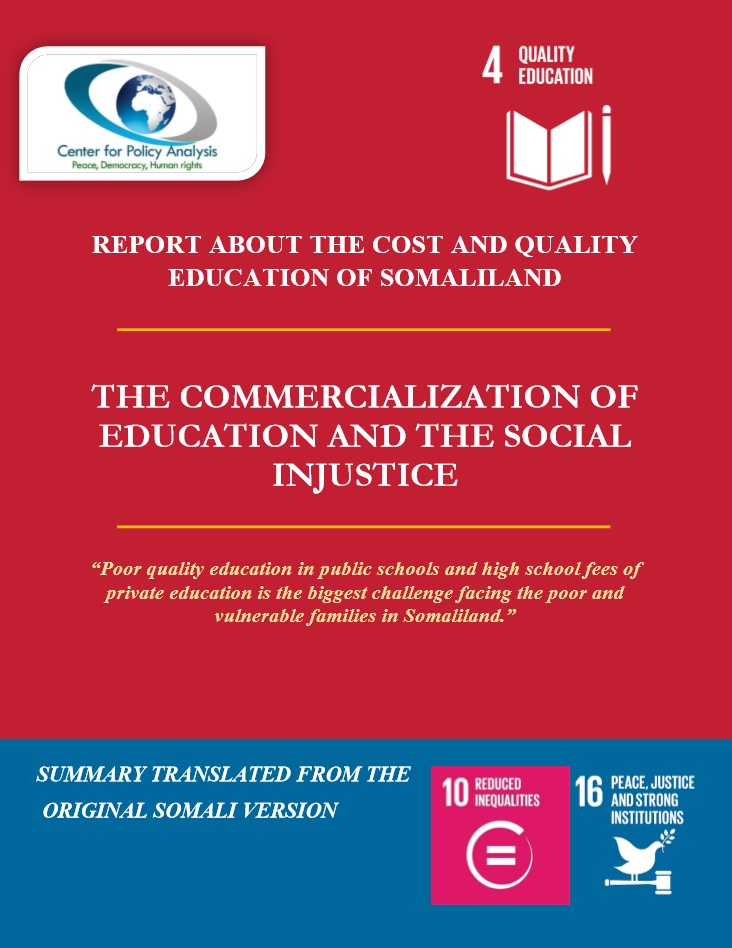 An ongoing international debate in many parts of the world, is that numerous entrepreneurs are investing in education, and expecting lucrative profits, regardless of the quality of education or the students they produce and their contribution to the society. Now it seems that the same debate has started in Somaliland, and there are growing private schools which are invested by affluent teachers, or some other businessmen looking for moneymaking ventures and some even rented premises that were not designed for education, but for family residence. They charge high fees making a lot of money.

The number of students enrolled in public primary and intermediate schools in Somaliland were estimated in 2018[1] about 153,077 with a total of 6057 teachers. Additionally, there are a greater number of students attending private schools. The school year 2015-2016, the number of registered schools were 1,145 schools, in which 989 of them are public schools and the remaining 156 are private schools. The Maroodi-jeex region hosts 32.3% (350 schools out of 1083 schools in the country) [2]. Furthermore, there are 644 madrasas (Koranic schools) with more than 100,000 students in Hargeisa, home to large proportion of the population in the country. On average, every teacher in the state-owned primary and intermediate schools teaches in a class of approximately 25 students, while the madrasas in Hargeisa, on an average, every teacher teaches approximately a class of 35 students.

The CPA Center in collaboration with a volunteer group of students, conducted in February 2019, a brief study to review the education situation in Somaliland, particularly in Hargeisa, which is the home of nearly 37% of country’s population. This study was conducted through 48 households living in the 8 districts of Hargeisa, and 20 public and private schools.

This research looked into the costs of families providing education for their children. The results were that a family with 3 children enrolled in private schools in Hargeisa’s educational system, pay an average of $109 per month. This amount includes an average of $65 on student fees and $44 on school uniforms, school bus transportation, curriculum material for students to purchase, etc.

While the government is being the key employer, public school teachers, subordinate public-sector employees and subordinate armed personal and security forces are paid less than $200 a month. When you look at their salaries and compare to the average of the monthly fee of Private Schools that are required to pay, there is big gap. if a soldier on duty and a public servant have to pay up to 50% of their salary to educate their children plus the rent, housing bills, etc., this will lead to the fact that these members are unable to provide their children with comfort to go to private schools, instead their children to go to the public schools that were known for their educational low quality, or some of them could not afford to send them even to schools at all.

The Koranic schools or madrasas are also a source of major complaint, indicating that their prices are too high, for example, the CPA’s findings indicate that the monthly fee is between $5 to $35 per student. They charge an average of $10 per student. In Hargeisa, there are 644 madrasas with more than 100,000 students. However, most of the Koranic schools are located in the wealthy neighborhoods, instead the madrasas are scarce in areas dominated by low income families or the IDPs camps.

The research outcome shows that the government’s free education program of 2011 has had a great impact on the quality of public education in the country, resulting in the loss of teacher incentives which were generated from student fees in public schools, a result of that, the qualified teachers transferred to private schools. Even though the former ruling Kulmiye administration had declared the policy of the free primary education, they had never been able to allocate sufficient funds to meet the needs of the teachers in public schools. The research also found that there is still a significant fee paid by students attending in public schools, although the Ministry of Education and Science still maintains its policy of free primary education and that students do not have to pay for money in their primary and elementary education.

Public schools’ principles interviewed revealed to CPA that none of the children of the top government officials attend their schools and also other public schools. Instead they enroll their children to private schools to escape the poor quality of public school education.

The findings of this research also include, that teachers – who have sufficient capital – and other businessmen are currently investing in education, specifically in private schools, with the primary aim of making more profits. Private schools take and hire qualified teachers from public schools, promising a better salary at the same time, generating income through high fees from students in their schools. This has transformed private schools to vie for which school charges the highest fees and became a place where students from well-to-do family backgrounds are well-educated, while government schools are increasingly becoming more prominently a place for students from low income families. This educational hierarchy and unequal living standards created by wealthy educators and businesses investing in education, adversely affects the targets of Goal 16+ of Sustainable Development Goals, of getting inclusive society “living with peace, justice and strong institutions”. As it turns out, when government schools are attended only by students from lower income families, this could lead to discrimination and resentment felt towards rest of society, leading to risk the national security.

Other issues emerged during the course of the survey is that 20% of the families interviewed have children at home that are ready to be sent to schools, but they are unable to enroll them for financial reasons and can’t afford to provide education, so they remain at home. The unfortunate issue CPA Report found during our data collection was that the children staying out of school are most of them are girls, as some families prioritizing, if they get a money, to send schools for their sons and leave the daughters at home in order to do the housework. In public schools, CPA Report also found that some schools have no clean toilets or the toilets have no proper doors to use, so this leads some girls to leave the education, since there are no available girl friendly toilets in public schools

[2] Somaliland in Figures, available in the website of Ministry of Planning